The end of August saw Norfolk County FA recognise members of the community at the annual Volunteers Awards Evening, held at Sprowston Manor, one of which was Aylsham FC’s Mick McCann, who picked up a long-service award for services to local football.

The Volunteers Award Evenings celebrate the incredible contributions that clubs, leagues and individuals made to grassroots football in Norfolk during the 2016-17 season.

Previous years have seen the likes of Jake Humphrey, Graeme Le Saux and Bryan Gunn as special guest for the evening and this year it was Wimbledon and French Open Champion Alfie Hewett, with The Voice Kids star and local boy Perry Cooke for entertainment.

Mick started playing for Aylsham aged 15 in 1970. He then co-ran the reserve team with Roy Starling in 1973 and went on to manage the A team for many years before having another five years at the helm of the reserve team. Today he has the role of club secretary, a position he has held since 1998. He can also be seen as barman, cleaner and handyman at Youngs Park.

Mick said: “I am pleased to have been recognised in this way. The time has gone very quickly and although there have been ups and downs along the way I am proud of what Aylsham FC has become today.”

Club chairman, Ian Potter paid tribute to Mick, saying: “Our club is built on volunteers and Mick epitomises what our club philosophy is all about.

“Although we currently have a small band of volunteers we are looking to grow this over the next few months and hopefully we will be celebrating more people like Mick in years to come.” 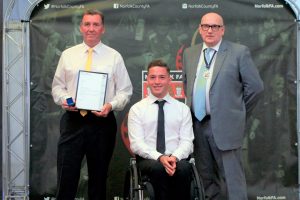