Women’s football at Aylsham will kick off next season with a re-booted 11-a-side team led by an experienced coaching team from Norwich City.

The move signals the growing club’s ambition to provide football opportunities for everyone in the community.

It will start the 2022-23 season with more than 30 teams and groups catering for toddlers to over-55s.

He will be joined by former colleagues Colin Seal as his assistant and Jordan Arnoup as player coach.

Steve has also previously coached girls and women’s sides for the Norman Wanderers club in Norwich.

He is delighted to be given the opportunity to run the women’s team adding: “The club’s vision appealed to me and mirrors my own. I want to welcome women and girls to the club and return the team to its former glories.

“It really excites me. I want to be competitive, but not elitist. The aim is to be inclusive and attract players regardless of their experience or ability.”

Aylsham club chairman Ian Potter said: “This creates an amazing opportunity to build on the fantastic work by some very dedicated people in the club and hopefully acts as a catalyst to supercharge our girls’ and women’s footballers playing in orange and blue.“ 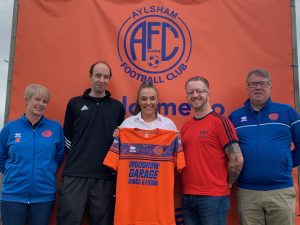