Aylsham kicked off and worked the ball around the pitch nicely resulting in Alfie testing the goalkeeper from distance. In the 3rd minute the hosts had a sight of goal again after Freddy and Jude played head-tennis to set Jaiden away down the right and his dangerous first-time cross fell to Jude who curled his effort just over the bar with the outside of his right foot. After winning possession in the middle of the pitch a Sprowston player threaded the ball in behind the Aylsham defence for their striker to chase. Just as he looked to get his shot away Ollie caught up with him, shepherded his opponent wide and stepped in to clear the danger.

In the 5th minute the hosts took the lead with a well worked goal. Tyler and Ronnie combined well from a throw down the Aylsham left before Ronnie swung in a dangerous cross that Freddy controlled well. With his back to goal and a player on him he laid the ball to the edge of the area where Jude was on hand to rifle in a right-footed shot across the keeper and into the corner of the net. Sprowston looked to get back on level terms immediately and won a flurry of corners but these were well defended and soon Aylsham were back on the front foot.

In the 14th minute the home side doubled their advantage after a throw-in by Ollie was flicked on by Freddy who out-jumped two opponents. Jaiden took a clean first touch advancing into the box before squaring it to Alfie who’s shot was too hot for the keeper to handle as the ball rolled over the line in off the post. A minute later it was 3-0 after another well worked goal and glorious finish. Ollie’s long throw was initially headed clear but Jude regained possession before lifting the ball into the box. Jaiden was first to it and he found Ronnie in space who adjusted his position to judge the flight of the dropping ball before executing a perfect volley into the far corner of the net. Straight from kick-off Sprowston pulled a goal back with a fantastic cross-shot from the right side of the area to make it 3-1. Aylsham shuffled the pack with Josh going from a central position to wide right and Jaiden moving from the right into the middle.

In the 22nd minute as Freddy looked to break away he was tripped to win a free-kick midway inside the Sprowston half. Freddy dusted himself off and took the kick himself, hitting it sweetly and, while the keeper had a teammate on the line, it was just too high to keep out of the net to restore Aylsham’s three goal cushion. Seven minutes later it became 5-1 after an infringement by a Sprowston player gave the hosts a free-kick. Mitchy launched the ball forward and, after taking a deflection off a visiting defender, Josh’s forward run took him into the area and he brought the ball under control with a lovely first touch before flicking it past the keeper.

Just before the restart Ronnie took a breather bringing Brad into the action and in the 30th minute Jack came on for Freddy. Ollie’s long throws continued to cause the visitors trouble, the latest being flicked on by Alfie and only an acrobatic full length diving save kept the ball out from a powerful shot by Jaiden from outside the area. Jack’s corner was flicked goalwards by Brad but was headed off the line. Josh took the next corner and Alfie rose to meet it but saw his header cleared off the line as Sprowston defended doggedly.

As the half entered its last 5 minutes Adam had to be on his guard as a clearance was charged down but he bravely saved at the feet of a visiting forward. The Aylsham keeper was called into action two minutes later after a Sprowston free-kick was whipped in and volleyed goalwards but Adam dived low down to his left to keep the ball out and reacted quickly to smother the loose ball. Jack, Josh and Ollie combined well down the right before moving it to Jaiden who squared it to Jude in turn finding Alfie. Alfie played it across to the left where Brad worked his way into the box but fired narrowly wide as the half came to an end.

Sprowston kicked off the second half and the opening six minutes were played at a frantic pace with Aylsham looking to keep possession but Sprowston closing down quickly. Mitchy had to be alert and show his strength and speed to prevent the quick visiting striker from getting to a long ball first. Jack and Brad swapped flanks as Aylsham looked to use the wide players to build attacks and Freddy came back on to replace Josh in the centre of midfield. Two minutes later Ronnie came back into the fold replacing Alfie, Ronnie moving to the left with Jack moving to right back and Mitchy moving up front.

Sprowston had a few sights of goal, Tyler blocking a shot bravely and moments later Denver, in a four man wall, jumped to clear a direct free-kick from the edge of the area. In the 56th minute Aylsham put together a flowing move that almost resulted in a goal. From Adam’s goal kick Tyler helped it forward to Ronnie who flicked it inside to Mitchy with his head and his first-time pass set Freddy away. Freddy accelerated away from his marker and advanced into the box where he struck a fine shot that the keeper saved well but could only push it out into Ronnie’s path and he struck a powerful shot that brought another fine save. From the corner Ronnie went close again but hooked his shot just over the bar. Moments later Jaiden made way for Josh.

In the 61st minute a long throw-in by Jack was nodded back to Mitchy and he struck a volley that dropped just wide of the far post. A minute later Alfie came on in the centre of defence to replace Ollie. In the 64th minute Sprowston scored their second goal after a long ball over the top was seized upon by a visiting forward and he finished clinically from inside the area. On the very next attack Sprowston went close again after another long ball breached the Aylsham backline but Adam judged the shot perfectly to catch it with confidence above his head.

Jack and Mitchy combined well to set Freddy clear but a sliding challenge halted this passage of play, Brad retrieved the loose ball, putting in a deep cross that was half cleared to Josh who nodded in to Jude who in turn laid it back to Mitchy who saw his shot fly just wide. It was end to end stuff at this stage as Sprowston drove forward with their striker getting in behind the backline but Adam stood his ground to parry the first shot and a second Sprowston player picked up the rebound and forced another smart save from Adam before Jack cleared the danger. The final whistle blew to signal the end of a much more even second half with Aylsham victorious by 5 goals to 2 remaining in pole position at the top of the Norfolk Combined Youth Football League U13 Premiership. 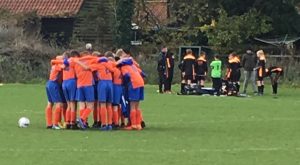