Oxborough, 20, who has recently celebrated a new contract with Norwich City tying him to the club until 2020, said: “I played my youth football for Hemsby Hornets, a time I will always remember. It’s great to see youngsters today here at Aylsham celebrating their season.

“I didn’t have facilities like these at Youngs Park when I was playing at this age so the boys and girls are very lucky.”

Reflecting on the coming season Oxborough said: “My plan is to get close to the first-team squad, play well in the under-23s, and maybe a loan spell somewhere will help me achieve this.”

And commenting on Angus Gunn, Norwich City’s first-choice goalkeeper last season, he added: “I have been at Norwich since I was 11 and Angus followed the same route as me. He gave me some technical advice and I hope to follow his path into the first team at Norwich”.

Also joining in the goalkeeping training session was Aylsham’s own Sam Blair. Sam, who is the goalkeeper for Norwich City under-16s, broke into the under-18 squad last season and played in the Hospital Cup win over their Ipswich Town counterparts.

Sam said: “Aylsham will always be my club and it was great to join in with all the young goalkeepers this evening. It is good to see that the club hold training sessions for goalkeepers. Big thanks to Aston for supporting them this evening.” 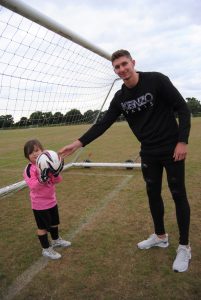 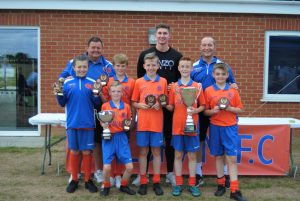 Aston Oxborough with some of the players and coaches of Aylsham FC Under 12s.